Srinagar, October 30 (Kashmir Voice): In occupied Kashmir, the Jammu and Kashmir Democratic Freedom Party (DFP) has said that Indian leaders are not sincere in resolving the Kashmir dispute as per its historical background.According to media sources, the DFP spokesman in a statement issued in Srinagar said that India was hell bent on suppressing the genuine voices and filling jails with those demanding legitimate rights.He termed BJP General Secretary’s 4-point formula as deception and said the people of Kashmir and resistance leadership have not forgotten the hardships they faced while struggling for the freedom movement. He said the vilification campaign launched against the resistance leadership and arresting them on fabricated charges is part of the process. He said PDP’s ‘no bullets but talks’ slogan has proven hollow by Ram Madhav’s assertions and it has been clear that PDP has completely surrendered itself before New Delhi to remain in power. He said the freedom movement will be taken to its logical conclusion at any cost. KASHMIR VOICE 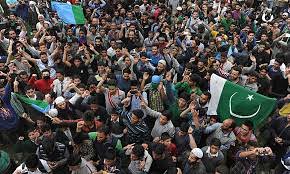 ← ARTICLE 35-A: SC DEFERS HEARING BY TWELVE WEEKS
Solution Lies In Dialogue With All: Radha Kumar →