Srinagar, October 30 (Kashmir Voice): In occupied Kashmir, pro-India National Conference while calling for a political initiative, has said that a singular focus on military and operational mechanism to deal with the Kashmir issue in the absence of a political initiative is a dangerous approach and continues to alienate the people. According to media sources, the National Conference in a statement issued after re-election of Farooq Abdullah as party head by thousands of delegates participated in the day-long session in Srinagar said, “We urge both India and Pakistan to initiate a sustained, sustainable and comprehensive dialogue process to resolve all outstanding issues.”Â  On the occasion, Farooq Abdullah said that Pandits had left Kashmir Valley because of Jagmohan while lashing out at the NDA government over its Kashmir policy.Â  Without naming Army Chief Bipin Rawat, Farooq Abdullah also hit out at him saying, “General says the Army will do its job. How many people would you kill? We are not scared. This is a political issue. Until you resolve it, there will never be peace here.” Â National Conferenceâ€™s working president and former Chief Minister Omar Abdullah said that the Kashmir issue should be solved through a sustained dialogue with both internal and external stakeholders, an apparent reference to Hurriyat leaders and Pakistan. KASHMIR VOICE 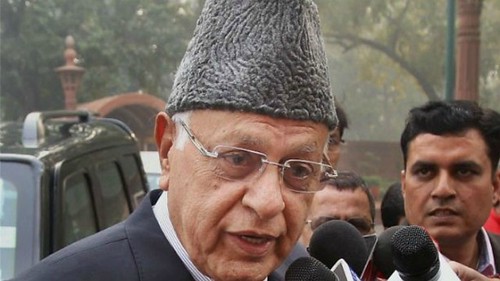 ← BJP, Congress asked not to use Kashmir Dispute for Politics
Kashmir Black Day Observed in Toronto →