Toronto, October 30 (Kashmir Voice): Like Kashmiris and their friends around the world, the Canadians too observed Kashmir Black Day in Toronto, Canada.
According to media sources, the Canadians from all walks of life that included members of the Kashmiri community as well as others at a conference observed Kashmir Black Day. In his welcoming remarks, Zafar Bangash, Director of the Institute of Contemporary Islamic Thought and Convener, Friends of Kashmir Committee briefly touched the significance of the day. He explained why the Kashmiris observe October 27 as ‘Black Day’. The last ruler of Kashmir, Maharaja Hari Singh had already fled Srinagar, the capital of the territory, because of the people’s uprising but under Indian coercion he ‘signed’ what is referred to as the ‘Instrument of Accession’ on October 27, 1947.
This spurious document that has never been seen in public was used as pretext to ‘allow’ Indian troops to land in Srinagar to occupy the city as well as begin the long occupation of the state itself. According to historian Alistair Lamb, Indian troops were already in Kashmir at the time the so-called accession instrument was signed. In fact, it was drafted by the Indians and put before the maharaja to sign who had already fled and thus abdicated his responsibilities as ruler.  Thus, he had no authority to sign away the future of the Muslim majority state.Even so, the last viceroy, Lord Mountbatten as well as Indian Prime Minister Jawaharlal Nehru pledged that this was a ‘temporary arrangement’ and that as soon as law and order were restored, a UN-supervised referendum would be held to determine the wishes of the people. That promise repeated on several occasions by Indian rulers, and enshrined in numerous Security Council resolutions, remains unfulfilled.Further light was shed on the importance of observing Black Day by Salma Rafique who herself is from occupied Kashmir. She not only highlighted the background of the day but also reminded the participants of Article 1, section 1 of the International Covenant on Civil and Political Rights that states, inter alia: “All peoples have the right of self-determination. By virtue of that right they freely determine their political status and freely pursue their economic, social and cultural development.”  To India’s lasting shame, this right has been denied to the people of Kashmir for 70 years. Canadian peace and human rights activist Barry Weisleder who is Federal Secretary of Socialist Action and co-editor of Socialist Action newspaper, lent his voice to the legitimate struggle of the Kashmiri people as did Sukhmider Singh Hansra, President of the Shrimoni Akali Dali Armitsar. Dr Ali Mallah, a long time activist for justice and peace called for unity among the oppressed including the First Nations people in Canada to secure their rights. He challenged the Canadian Labour movement to step forward and assume its responsibility of speaking on behalf of the oppressed worldwide whether in Kashmir or Palestine.
While Kashmiris remain under a brutal Indian occupation and suffer as a consequence, religious minorities that are citizens of India also face the wrath of Hindu fascists.
There is an alarming rise in Hindu fascism since the ascension of Narendra Modi to power in India. Modi cut his political teeth with the Hindu extremist outfit, the RSS whose signature mark is targeting Muslims in India.
Not surprisingly, India has become a very unsafe place for Muslims, Sikhs and Christians as well as women and Dalits. The last group is condemned to a life of perpetual degradation and humiliation.
The program concluded with presentation of a resolution calling upon the United Nations and the global community to uphold the principle of self-determination for the people of Kashmir.
There was also a video presentation of Indian troop brutalities against the Kashmiri people. Despite such oppression, the people of Kashmir have not been cowed down and continue to resist their occupiers with their bare hands.
Following resolution was passed on the occasion:

Resolution
– Noting the ongoing grave human rights violations in Indian Occupied Kashmir, in particular, since the latest round of killings and brutalities that began on July 8, 2016 in the aftermath of the extra-judicial execution of a young Kashmiri freedom fighter, Burhan Wani;

– Noting Indian defiance to the calls by the UN Commissioner for Human Rights in Geneva, and the OIC for an independent investigation into HR violations in Indian occupied Kashmir (IoK);

– Condemning the use of pellet guns by the Indian occupation forces to willfully blind a whole generation of Kashmiris, mostly youth;

– Noting with deep concern India’s approach to systematically change the demography in IoK to convert Muslim majority Kashmiris into a minority;

– Expressing deep concern on the arbitrary arrest of over 10,000 Kashmiris whose fate remains unknown;

– Recalling the massacres committed in IoK by Indian occupation forces between 1989 and 2017;

– Taking note of the findings of the International People Tribunal’s Report, entitled, ‘Buried Evidence in the wake of discovery of unnamed and unmarked mass graves in IoK’;

– Recalling the offer of the United Nations Secretary General to help resolve the long-festering problem of Jammu and Kashmir through dialogue,

– Reminding India of the repeated pledges made at the highest level to allow the people to decide their future through a plebiscite, in particular, the statements by Prime Minister Nehru in October 1947 and 1951, in which he stated that “We (India) have declared that the fate of Kashmir is ultimately to be decided by the people. That pledge we have given… not only to the people of Kashmir but to the world. We will not and cannot back out of it. We are prepared when peace and order have been established to have a referendum held under the auspices of the UN.”

– Expressing concern at the escalating tensions between Pakistan and India on the Line of Control and the deliberate killing of Kashmiri civilians;

1: Whereas the human rights situation of the people of Jammu and Kashmir under Indian occupation continues to deteriorate;

2: Whereas egregious crimes are being committed against defenceless civilians, particularly women, more than 11,000 of whom have been raped;

3: Whereas no Indian civilian or security personnel have been arrested, much less prosecuted for such crimes;

4: Whereas the culture of impunity has continued as per the December 6, 2012 report of the IPTK and APDP;

5: Whereas India maintains an occupation force of more than 700,000 troops in Jammu and Kashmir and hundreds of thousands of armed constabulary and police;

6: Whereas enormous resources are expended on the acquisition of weapons including nuclear weapons thereby threatening the security of the entire region;

7: Aware that such resources could be better utilized for the upliftment of the respective populations in India and Pakistan;

The Participants at this Conference on Kashmir held in Toronto, Canada, therefore,
1: Call on India to cease forthwith all human rights violations against and stop bloodshed of the people of Jammu and Kashmir;
2: Call on the government of India to allow UN / Independent investigations into the human rights situation, to establish responsibility and determine appropriate punishment for the perpetrators of such crimes that are against International Humanitarian Law and International Human Rights Law;  3: Call on India to withdraw all its troops including Armed Constabulary from Jammu and Kashmir, particularly from cities, towns and villages to enable resumption of normal life and create enabling environment for the plebiscite to be held under the auspices of the UN as enshrined in UNSC resolutions on Kashmir; 4: Call upon the UN to assume its responsibility of organizing the plebiscite under its supervision;  5: Request the OIC Secretary General to compile a report on human rights violations in Indian-occupied Kashmir and urge constant monitoring of the human rights situation by the IPHRC; 6: Urge the UN and other relevant forums to investigate all massacres, gang-rapes, fake-encounters, forced disappearances, wilful blinding using pellet guns, etc. committed by the Indian forces and Hindu terrorist organizations RSS, etc. and bring the perpetrators to justice;  7: Call on all concerned individuals and organizations to remain engaged with the tragic situation;  8: Request all international organizations including the OIC, EU to play a meaningful and effective role in the resolution of the Jammu and Kashmir dispute. Further, that these organizations formally approach India to allow access for international organizations to Indian-occupied Jammu and Kashmir. 10: Resolve to remain engaged with the situation and continue to highlight the plight of the Kashmiri people at all possible forums. Adopted at Toronto, on October 28, 2017, by the Participants at the Black Day Commemoration Conference in Canada. KASHMIR VOICE 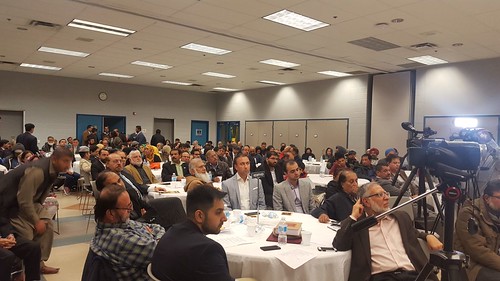