Srinagar, October 30 (Kashmir Voice): In occupied Kashmir, the Chairman of Jammu and Kashmir Peoples League, Mukhtar Ahmad Waza along with a delegation visited Seer Hamdan area of Islamabad district to express condolence with a victim in the area.According to media sources, Waza sympathized with the family. Other members of the delegation included Nisar Ahmad Rather, Manzoor Ahmad,Molvi Aarif, Moammad Younis, Sajjad Ahmad,  Mohammad Waheed and Shujatul Islam. Meanwhile, addressing the delegations from Pulwama, Kakapora, Sambooara and other areas, Mukhtar Ahmad Waza expressed solidarity with the families of Kashmiri detainees languishing in different jails. “By using military might, the genuine and sacred movements can’t be muzzled. Kashmiris are fighting for right to self-determination and priceless sacrifices have been given by the people of Kashmir,” he added. KASHMIR VOICE 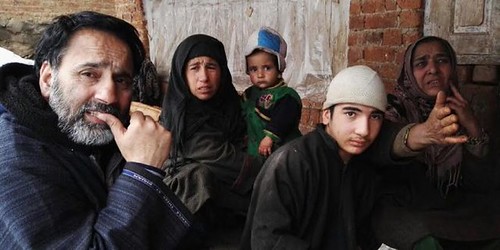 ← Solution Lies In Dialogue With All: Radha Kumar
‘India has Forcibly Occupied Kashmir’ →