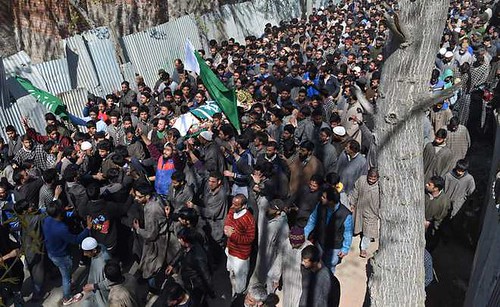 Srinagar, August 30 (Kashmir Voice): In Indian illegally occupied Jammu and Kashmir, Hurriyat leaders and organizations have condemned in strong terms the new spate of killings by Indian troops in the territory.
According to media sources, the Jammu and Kashmir Democratic Freedom Party in a statement issued in Srinagar, today, termed the latest killing as the worst kind of state terrorism. A DFP spokesman while paying rich tributes to the youth martyred by Indian troops during cordon and search operations in Srinagar, Shopian and Pulwama districts expressed solidarity with the families of the martyrs.
Lauding the sacrifices of the youth the spokesman said that Indian state terrorism would not deter Kashmiris from pursuing their long cherished goal for which they have offered unprecedented sacrifices. The party also took a strong exception to the use of brute force on Muharram processions and indiscriminate pellet firing on mourners in Srinagar, Budgam and other areas of the valley.
Jammu and Kashmir Muslim Conference Chairman Shabbir Ahmed Dar and Muslim Khawateen Markaz Chairperson Yasmeen Raja in a joint statement in Srinagar paid glowing tributes to the martyrs of Srinagar, Pulwama and Shopian and said that the Kashmiri youth laid down their precious lives for the sacred cause of freedom.
“These proud sons of soil are nourishing the resistance movement with their blood and are also reminding the world community that it has failed in protecting the political and human rights of the Kashmiri people,” the statement said. The leaders said that these martyrs would always serve as beacon for generations to come.
Shabbir Ahmed Dar and Yasmeen Raja further said that the new political formations in Kashmir led by new Mir Jaffers and Mir Sadiqs are doing all this to please their fascist masters in Delhi. The traitors cannot and can never change the ground realities in Kashmir, they added. KASHMIR VOICE