Srinagar, September 15 (Kashmir Voice): In occupied Kashmir, the Hurriyat forum led by Mirwaiz Umar Farooq has said that it is the moral duty of all people and nations of the world to impress upon India to stop the use of lethal weapons against the people of Kashmir for demanding their basic political rights.
According to media sources, this was said during the forum’s Executive Council meeting chaired by Mirwaiz Umar Farooq in Srinagar. The meeting was attended by Professor Abdul Ghani Butt, Bilal Ghani Lone, Muhammad Musadiq Aadil and Mukhtar Ahmed Waza. The meeting unanimously said that the strong censuring of the Indian Government by the Amnesty International with regard to the indiscriminate and inhuman use of pellet guns against the people of occupied Kashmir based on facts and figures should serve as an eye-opener to all champions of human rights in India and world over and should shake the conscience of nations across the globe. The Amnesty report highlights the plight of the people of occupied Kashmir and the reign of terror unleashed upon them by the use of pellets that have killed scores of people and left hundreds of youth partially or fully blinded or maimed and injured since last year. The forum spokesman said that the meeting strongly denounced the frequent cordon and search operations conducted by Indian forces in the Valley especially in South Kashmir villages, turning the villages into a garrison and keeping the entire population caged and hostage for hours together causing them great distress. The meeting also condemned the continued policy of oppression and suppression against the people of Kashmir by the puppet authorities especially the killing of youth, arresting and detaining them under one pretext or the other, and persecuting them and their families to harass and intimidate them, he said. Participants of the meeting said that the arrests of Hurriyat leaders and activists, businessmen, journalists and students by Indian’s National Investigation Agency and the frequent raids being carried out and notices sent to people from all walks of life in Kashmir by the agency was an obvious attempt to intimidate and malign the leadership and those associated with the liberation struggle and to defame and degrade the freedom movement itself. They said, these tactics have failed in the past and are destined to fail yet again. The meeting reiterated that the Kashmir dispute is essentially a political and human issue and not resolving it keeps increasing the huge threat to peace and stability not only in South Asia but in the entire world. Later, the puppet authorities placed Mirwaiz Umar Farooq and Mukhtar Ahmed Waza under house arrest. KASHMIR VOICE 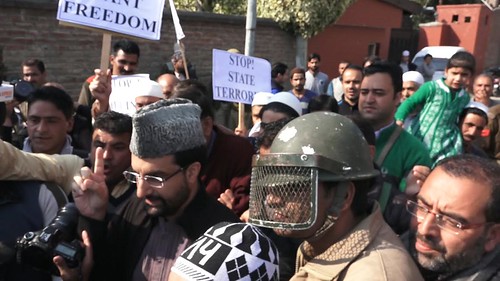 Geneva, September 15 (Kashmir Voice): Kashmiri representatives, Syed Faiz Naqshbandi and Ms Benazir Khan, met Idriss Jazairy, the UN Special Rapporteur on the negative impact of unilateral coercive measures on the enjoyment of human rights in Geneva.
According to media sources, Syed Faiz Naqshbandi and Ms Benazir Khan held a meeting with Idriss Jazairy on the sidelines of the ongoing 36th session of the UN Human Rights Council in Geneva. They apprised the Special Rapporteur about systematic and massive human rights violations by Indian forces’ personnel in occupied Kashmir and India’s designs to change the demography of the territory. KASHMIR VOICE 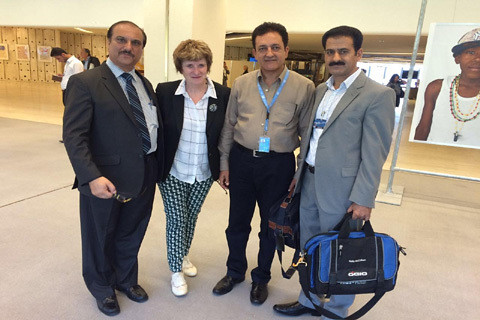 Srinagar, September 15 (Kashmir Voice): In occupied Kashmir, Hurriyat leaders and organizations have hailed the report of Amnesty International (AI) that asked the Indian government to immediately stop the use of pellet guns by Indian troops against the protesters in the territory.
According to media sources, APHC Chairman, Syed Ali Gilani in a statement issued in Srinagar, while hailing the report, termed it an eye-opener for India which claims to be the largest democracy of the world. He said a total ban on the indiscriminate use of pallet guns and other lethal weapons against the human beings as demanded by the Amnesty International needs compliance by Indian authorities. He deplored that the lethal weapons are used against the peaceful protests organized by the people raising the slogan for right to self-determination since 1947. He added that the frequent use of heavy weapons and repressive measures in the territory had become the routine matter and people were being subjected to such cruel methods of physical and mental torture. The APHC Chairman also condemned the action of India’s National Investigation Agency (NIA) of summoning the Kashmir High Court Bar Association President, Mian Abdul Qayoom, repeatedly at its Delhi office. He termed the role of NIA as highly politically-motivated to victimize respectable people belonging to all walks of life so as to keep them away from the people’s ongoing peaceful movement for achieving the right to self-determination. Syed Ali Gilani praised the steadfastness shown by a young Hurriyat activist, Umar Aadil Dar, who has been detained in Humhama police station in a fictitious case. He appealed to the UN and world human rights organizations to prevail upon the Indian government to stop the use of lethal weapons and other atrocities against the peace-loving people of occupied Kashmir. The Hurriyat forum led by Mirwaiz Umar Farooq in a statement in Srinagar said, “The strong censuring of the authorities by the Amnesty International with regard to the indiscriminate and inhuman use of pellet guns against the people of Kashmir is based on facts and figures and should serve as an eye-opener to all champions of human rights in India and the world over.” Hurriyat leaders, Zafar Akbar Butt, Javaid Ahmad Mir and Muhammad Ramzan Khan, in their statements in Srinagar also hailed the Amnesty International’s report. KASHMIR VOICE 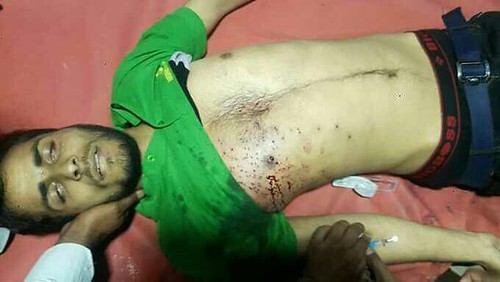 Srinagar, September 15 (Kashmir Voice): In occupied Kashmir, the High Court Bar Association (HCBA) has strongly condemned the harassment of its President, Mian Abdul Qayoom, by India’s National Investigation Agency (NIA) in New Delhi.
According to media sources, the HCBA spokesman in a statement issued in Srinagar said that Mian Abdul Qayoom was grilled by the NIA on Thursday and Friday (today) for several hours. He said that the Bar President was earlier summoned to New Delhi on September 6 and was questioned for two consecutive days. The spokesman said that main aim of the continuous questioning of Mian Qayoom was to harass and humiliate the Bar leadership. It is aimed at intimidating and threatening the HCBA leaders so that they give up their support to the principled cause and the inalienable right to self-determination of the Kashmiri people, he added. The spokesman said, lawyers in occupied Kashmir are on strike as a mark of protest and will continue it till the return of their President from Delhi. A team of HCBA Association is also accompanying Mian Qayoom in Delhi. KASHMIR VOICE

Srinagar, September 15 (Kashmir Voice): India’s Enforcement Directorate (ED) has again questioned Dr Bilqees Shah, the wife of illegally detained senior Hurriyat leader and the Chairman of Jammu and Kashmir Democratic Freedom Party, Shabbir Ahmed Shah.
According to media sources, Shabbir Ahmed has been lodged in New Delhi’s Tihar Jail in connection with a decades-long fake case. Dr Bilqees told a Srinagar-based English Daily Rising Kashmir over phone that it was for the fourth time that the ED had summoned her. “I appeared before the ED in New Delhi as they had summoned me for the 4th time,” she said, adding that she was questioned for over two hours by the ED officials. Dr Bilqees said that the ED officials had all the documents and property details owned by her. “They even checked her minute bank transactions. They told me to tell the entries I have made in 2005 and 2006. I told them how I could remember every minute transaction. I told them that since they had all the documents, why they were questioning me again and again,” she said. Dr Bilqees said the repeated summoning by the ED was disturbing her mentally. “I don’t understand why I am being repeatedly summoned although I Have appeared thrice before the ED officials since the arrest of my husband,” she added. Meanwhile, the Vice Chairman of Jammu and Kashmir Democratic Freedom Party, Mehmood Ahmed Saghar, in his statement issued in Islamabad strongly condemned the continued detention of party Chairman, Shabbir Ahmad Shah and NIA crackdown on Hurriyat leaders. He said that through such tactics India would never succeed to suppress the Kashmiris’ resolve for freedom. KASHMIR VOICE 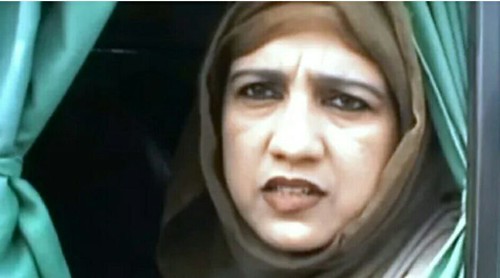 Srinagar, September 15 (Kashmir Voice): In occupied Kashmir, member of the so-called Kashmir Assembly, Engineer Abdur Rasheed, has said that the Kashmiris are not enemies of India or any other country but they cannot surrender their political rights.
According to media sources, Engineer Rasheed addressing a function organized to release the book comprising poetry of renowned Kashmiri poet, Sayal Pandithpori, in Handwara said, “We need to show commitment and consistency in our conviction and all that what we believe. Kashmiris are not against anybody but can never surrender their genuine political rights.” He said that the sacrifices offered by the Kashmiris during the last three decades needed a genuine and sincere response from New Delhi and by listening to voices of Kashmiris New Delhi would achieve a lot that could help India to obtain a status of its stature in the world. Engineer Rasheed paying rich tributes to Sayal Pandithopori recalled his contributions and said that Sayal Pandithpori stood firm with the then leadership for seeking right to self-determination. He said that the slogan of right to self-determination was as old as the history of India and Pakistan itself. KASHMIR VOICE 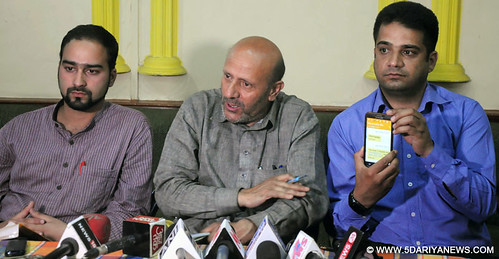