Srinagar, November 18 (Kashmir Voice): In occupied Kashmir, the High Court quashing the detention orders of three persons, who were booked under draconian law, Public Safety Act (PSA), has directed the puppet authorities to release them forthwith.
According to media sources, the court quashed the detention orders of Javed Ahmed Mir, a class 12th student Danish Farooq Butt and Muhammad Amin Parray. It is for the 4th time that the court has quashed the PSA detention of Muhammad Amin Parray. The President of High Court Bar Association, Advocate Mian Abdul Qayoom, represented the detainees. KASHMIR VOICE

Srinagar, November 18 (Kashmir Voice): In occupied Kashmir, the Jammu and Kashmir Muslim League (JKML) has condemned the invoking of draconian law, Public Safety Act (PSA), for the 36th time on the illegally detained party Chairman and senior APHC leader, Masarrat Aalam Butt, and his shifting to Kot Bhalwal Jail in Jammu.
According to media sources, the JKML spokesman in a statement issued in Srinagar said that violating the High Court orders, the puppet administration once again detained Masarrat Aalam Butt by slapping the fresh PSA on him. He said that the court while quashing the 35th PSA order against Masarrat Aalam Butt on October 26, 2017 had directed the authorities to release him immediately. “But instead of releasing, he was rearrested in connection with a frivolous FIR of 2015 lodged against him in Handwara and now has been shifted to Kot Bhalwal Jail, Jammu,” he deplored. The JKML appealed to the UN Human Rights Council, International Committee of Red Cross, Amnesty International and other world human rights bodies to take cognizance of illegal detention of Masarrat Aalam Butt under the black law PSA and help in his release. KASHMIR VOICE 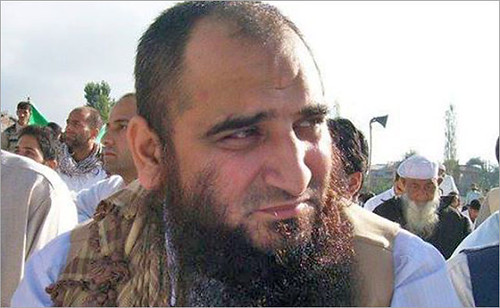 Srinagar, November 18 (Kashmir Voice): In occupied Kashmir, the High Court Bar Association (HCBA) has strongly condemned the puppet authorities for slapping black law, Public Safety Act, on senior APHC leader, Masarrat Aalam Butt, for 36th time and shifting him to Kot Bhalwal Jail in Jammu.
According to media sources, the HCBA spokesman in a statement issued in Srinagar said, invoking of PSA against Masarrat Aalam Butt is ruthless and classic case of misuse of power and authority by the puppet regime and its functionaries. He said that the APHC leader was repeatedly being detained under the PSA and lodged in jails located outside the Kashmir Valley and thereby his right of fair and speedy trial was violated and the cases pending against him in the courts were dragged on, without any substantial progress. The HCBA also expressed its deep shock on the damage caused to the shrine of Shah-e-Hamdan, Mir Syed Ali Hamdani, in Srinagar and hailed the efforts of those youth, who extinguished the fire and saved the shrine from getting completely burnt. KASHMIR VOICE

Srinagar, November 18 (Kashmir Voice): In occupied Kashmir, despite passing of a year since 76-year-old Ghulam Muhammad Khan was killed by a teargas fired by Indian troops at Elahi Bagh in Srinagar, the police admitted they are yet to get details of the CRPF troops who were on duty at the time of incident.
According to media sources, a communiqué of Assistant Inspector General of Police (AIG), Kulbir Singh, addressed to Indian Home department says that an FIR was registered in police station Soura and during investigation, the Investigation Officer, completed the basic legal/medico formalities. It says that on 17-11-2016 the injured succumbed to the injuries and offence under section 302 was added in the case. During investigation of case SHO Police Station, Soura, has taken up the matter with commandant 47 battalion, 115 battalion CRPF camp office Zakura and 82 battalion CRPF Hafiz Bagh for providing details regarding in and out vehicle Nafri of their concerned units on the said date, it says. However, it adds, the requisite details are awaited and the investigation of the case is going on. It is to mention here that Fayaz Ahmad Khan, a resident of Housing Colony Ellahi Bagh, in an FIR lodged in Soura police station on November 2, 2016 stated that his father Ghulam Muhammad Khan was sitting in the park adjacent to their house, where some youth of the locality were also playing carom. He maintained in the complaint that in the meantime, a vehicle of Indian forces reached the spot and its troops fired tear gas shells towards the park, resulting in injury to his father. The complaint says that later on the locals took Ghulam Muhammad Khan to Soura Institute of Medical Sciences Soura, Srinagar, for medical treatment. Khan died on November 17 at the hospital due to injuries caused by a teargas canister that hit his head, it adds. Fayaz Ahmed Khan has been running from pillar to post to seek justice for his father. He said that the police have filed an FIR but they are yet to bring the culprits to book. “My father was not a stone thrower or a protester. He was an aged man who was murdered by the forces’ personnel in cold blood. Despite knowing all the facts, the police have not taken any action against the forces’ personnel involved in his killing,” Fayaz said. KASHMIR VOICE 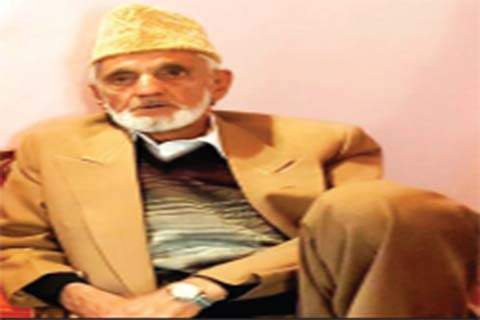 Srinagar, November 18 (Kashmir Voice): In occupied Kashmir, thousands of people, including women and children, attended the funeral of a martyred youth, Mughees Ahmed Mir, in Parimpora area of Srinagar, today.
According to media sources, Mughees Ahmed Mir was killed by Indian troops during a siege and search operation in Zakura area of Srinagar, last night. Despite strict restrictions imposed by the puppet authorities, thousands of people including women and children from early morning, today, had assembled in Parimpora area to participate in the funeral of Mughees. He was laid to rest amid high-pitched pro-freedom and anti-India slogans. Delegations of All Parties Hurriyat Conference, Jammu and Kashmir Salvation Movement, and other pro-freedom organizations also participated in the funeral of the martyred youth. Meanwhile, complete shutdown was observed in Srinagar and its adjacent areas to mourn the killing of the martyred youth. The Chairman of All Parties Hurriyat Conference, Syed Ali Gilani, in a statement issued in Srinagar paid glowing tributes to the martyred youth. He said that the puppet authorities had placed him under house arrest for the past several years and were not allowing him to attend the funeral prayers of the martyrs and expressing solidarity with their families. He also condemned the imposition of restrictions by the puppet authorities in Srinagar and continued illegal detention of APHC leaders, Ghulam Ahmed Gulzar, Muhammad Ashraf Laya, Muhammad Yasin Attai, Umar Aadil Dar and Syed Imtiyaz Haider. He said that Kashmiris were struggling to secure their internationally-recognized right to self-determination and curfews, restrictions, detentions and other such repressive measures could not stop them from carrying forward their freedom movement. The Chairman of Jammu and Kashmir Salvation Movement Zafar Akbar, and Jammu and Kashmir Peoples Freedom League and Democratic Political Movement in their statements also paid rich tributes to Mughees Ahmed Mir. They said that the Kashmiri martyrs were rendering their lives for a sacred cause and their mission would be accomplished at all costs. KASHMIR VOICE 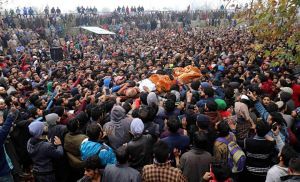 Srinagar, November 18 (Kashmir Voice): In occupied Kashmir, Hurriyat leader and the Chairman of Jammu and Kashmir Peoples League (JKPL), Mukhtar Ahmed Waza, has said that India and its puppet regime are suppressing the Kashmiris’ ongoing freedom movement through use of brute force.
According to media sources, Mukhtar Ahmad Waza along with a party delegation visited the house of a victim of Indian brutalities, Sameer Ahmad Butt, at Kotegund Dooru in Islamabad district. Sameer was ruthlessly tortured by Indian police last week and after release was admitted by his family in a hospital in Srinagar where he succumbed to his injuries. Addressing a gathering on the occasion, Mukhtar said India’s so-called democracy believes in suppressing people’s voices by jailing, torturing and oppressing them. He, however, maintained that India would never succeed to intimidate the Kashmiris into submission and they would continue their ongoing liberation movement till it reached its logical conclusion. He said that the permanent peace in South Asia would remain a dream till the settlement of the Kashmir dispute in accordance with the aspirations of the Kashmiri people. The delegation included Nisar Ahmed Rathar, Shujaat-ul-Islam, Zahoor Ahmad, Yawar Ahmad, Aajaz Ahmad and Tahir Ahmad. KASHMIR VOICE 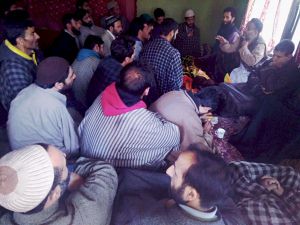