Srinagar, December 02 (Kashmir Voice): In occupied Kashmir, Eid Milad-un-Nabi (SAW) was celebrated with religious zeal and fervor as thousands of devotees thronged mosques, shrines and Khanqahs and also took out Milad processions after
According to media sources, various religious and social organisations organised Seerat programmes and Milad processions. Hundreds of people joined Milad processions from Habba Kadal, Barbar Shah, Bemina, Nowgam, Dalgate, Chanapora, Rambagh, Fateh Kadal and other localities of Srinagar. The biggest gathering was held at Dargah Hazratbal that houses the holy relic of the Prophet Muhammad (SAW). The devotees including women and children thronged the Shrine and had a glimpse of the holy relic which was displayed after every prayer. Senior APHC leader and the Chairman of Anjuman Sharie Shian, Agha Syed Hassan Al-Moosvi Al-Safvi led a massive Milad procession in Srinagar. The precession started from the shrine of Mir Shamsuddin Iraqi (RA) and ended at Imambargah Gulshanbagh, Botakadal. On this occasion, Agha Hassn Al-Moosvi said some media channels from India are hurting the sentiments of Muslims under a well planned conspiracy. The Jammu and Kashmir Ittehad-ul-Muslimeen took out a Milad procession from Chatabal in Srinagar which culminated at Karan Nagar Chowk after passing through different areas. Thousands of devotees participated in a rally led by Allama Hami of Karwan-i-Islami at Shaheed Gunj in Srinagar on the occasion of Eid Milad-un-Nabi. Special prayers were held at Masjids and shrines in Islamabad town mainly at Jamia Masjid Reshi Sahab, Khiram Sirhama, Kaba Marg, Dooru and Seer Hamdan. Milad processions were also held at these places. Prominent religious scholar and Chairman of Ummat-e-Islami, Qazi Yasir led a procession participated by thousands of devotees in Islamabad town. Similar processions were taken out in Baramulla, Bandipora, Pulwama, Shopian, Kupwara, Tangmarg, Beerwah, Kangan, Sumbal, Hajin and other areas. Eid Milad-un-Nabi was also celebrated with fervour across the Chenab Valley of Jammu region. Quran recitation, Hadees lessons and Naat recitations were organised throughout the Chenab valley. In Bhadarwah, the main function was held at the historic Jamia Masjid where hundreds of devotees took part in a procession from Jamia Masjid to Eidgah Road. Speakers on the occasion urged people to follow the teachings of the Prophet Muhammad (SAW). People also celebrated this auspicious day by distributing sweets and other items. Similar programmes were also held in Kishtwar, Doda, Sartingal, Ramban, Batote, Gool, Sangaldaan, Gandoh, Assar, Bhalla and other parts of the Chenab valley. Meanwhile, Mutahida Majlis-e-Ulema patron and the Chairman of Hurriyat forum, Mirwaiz Umar Farooq, addressing a massive gathering at Jamia Masjid in Srinagar said that the Prophet Muhammad (SAW) was a blessing for all worlds and his life had been termed as a true manifestation of the Holy Quran. He said that Almighty Allah sent the great Prophet (SAW) as a role model for the humanity who taught us peace, harmony, brotherhood, respect for the humanity, forgiveness and justice. The Chairman of Jammu and Kashmir Liberation Front, Muhammad Yasin Malik, addressing a gathering at Batamaloo shrine said, “Our Prophet (SAW) is our pride and the only way humanity can prosper and triumph is by following this greatest human in letter and spirit.” He said, “If we stick to great teachings of our beloved Prophet (SAW) and refrain from dividing ourselves into sects, no power on earth can ever defeat us.” KASHMIR VOICE 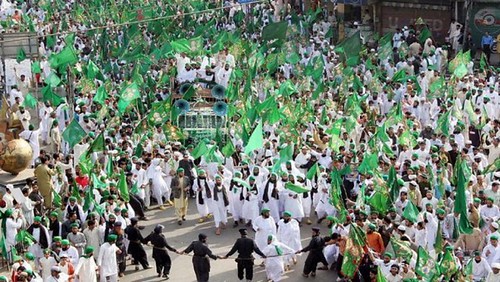 Srinagar, December 02 (Kashmir Voice): In occupied Kashmir, APHC leaders, Muhammad Yousuf Naqash and Hakeem Abdul Rasheed have strongly condemned the ill-treatment and ruthless thrashing of Kashmiri prisoners in Delhi’s Tihar jail and Kathua Jail of Jammu by the jail authorities.
According to media sources, Muhammad Yousuf Naqash and Hakeem Abdul Rasheed addressing a public gathering at Bakhshipora in Srinagar said that miserable condition and inhuman treatment meted out to the Kashmiri prisoners in different jails was a matter of grave concern. They said that the Kashmiri detainees were political prisoners and were entitled to proper health care, security and dignity under Geneva conventions. They appealed to the international human rights organizations to take such inhuman treatment of Kashmiri political prisoners seriously and exert pressure on India for their safety, proper health care and dignity and play role for shifting them from Indian jails to occupied Kashmir. Expressing dismay over the announcement of authorities to issue new type of identity proofs in Kashmir, they said the step is aimed to divide the people of Kashmir and will be opposed tooth and nail. They said: “special one-stop identity cards” for all Kashmiris to make the surveillance and movements of the citizens easier for occupied forces is a conspiracy against the people of Kashmir under which freedom-loving people would be brought to suppression. Meanwhile, the President of Employees’ Joint Action Committee (EJAC), Abdul Qayoom Wani, in a statement in Srinagar condemned the murderous attack on Kashmiri prisoners in Tihar Jail and termed it a shameful and inhuman act. “This is the prime duty of jail authorities to protect the life of prisoners and treat them humanly. But such incidents speak volumes of discriminatory attitude of authorities of Tihar jail which should be condemned by every human being,” he added. KASHMIR VOICE

Srinagar, December 02 (Kashmir Voice): In occupied Kashmir, Muhammad Ashraf Mir (26), a resident of Senzen-Shahoora village of Pulwama, is immobile since he was hit in his chest by a bullet in the firing of Indian troops on protesters on October 14, this year.
According to media sources, forceful demonstrations had erupted in Litter area of Pulwama on the fateful day after the killing of two youth by the troops during a siege and search operations. One more youth was martyred and several others including Muhammad Ashraf Mir were injured in the firing of the troops on the protesters. Muhammad Ashraf Mir in a media interview said that the bullet had pierced his chest causing damage to liver and spinal cord. “Since then I am restricted to a bed and not able to move even an inch. The bullet has damaged my spinal cord more than 90 percent,” he said. Ashraf’s nephew Amir Hamid said that they spent more than one lac rupees on three surgeries and medicines of Ashraf but there was no improvement. “During three surgeries, doctors removed a portion of his liver which was damaged by the bullet but didn’t succeed in helping the backbone injury,” he said. Muhammad Ashraf Mir’s 70-year-old mother, Zaiba Begum said that her injured son was the lone bread-earner for the family of 11 members. “He was a motorcycle mechanic before working in a brick-kiln. Now he can’t do any of the jobs,” she said. Zaiba’s husband passed away a decade ago. She was planning Muhammad Ashraf Mir’s marriage little knowing that the destiny had something else in store for the family. KASHMIR VOICE 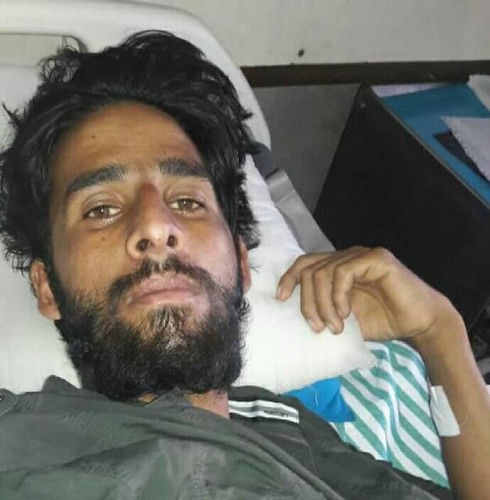 Srinagar, December 02 (Kashmir Voice): In occupied Kashmir, forceful demonstrations erupted in Trichal area of Pulwama district after Indian troops launched a cordon and search operation, today.
According to media sources, the troops laid a siege around Naira and Tahab areas of Trichal and started house-to-house searches, causing huge inconvenience to the people. Youth took to the streets and staged massive protests against the operation. The troops used brute force and fired teargas shells to disperse the protesters, triggering clashes between the demonstrators and the troops. Local people said that the occupational troops also damaged windowpanes of some residential houses during the operation. Meanwhile, the troops also launched a siege and search operation in Arigam area of Pulwama district. KASHMIR VOICE 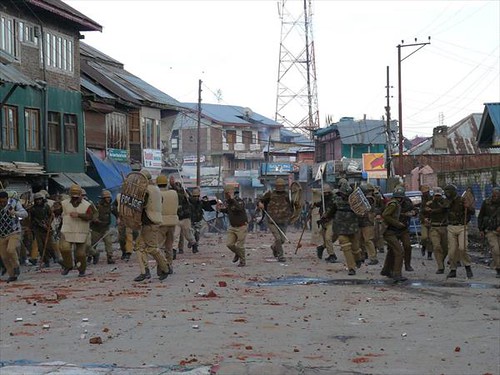 Srinagar, December 02 (Kashmir Voice): In occupied Kashmir, complete shutdown was observed in Pakherpora and its adjoining areas in Badgam district for the second consecutive day, today, against the killing of four youth by Indian troops.
According to media sources, the troops martyred the youth during a violent cordon and search operation in Pakherpora on Thursday. All shops and business establishments remained shut while traffic was off the road in Pakherpora, Mohanpora, Chariepora, Kamraziepora, Thokarpora, Dabrgam, Rahmoo, Fotlipora, Aglar Kandi, Kadi Pora, Kahi Gam Dalwan and Kanedajen areas. KASHMIR VOICE 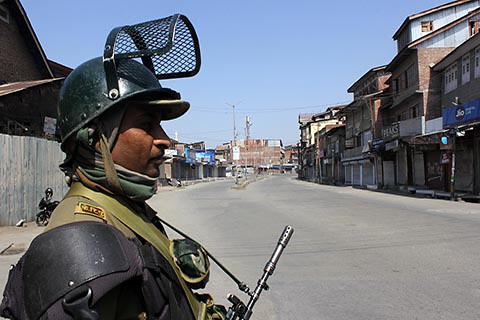 Srinagar, November 30 (Kashmir Voice): In occupied Kashmir, the puppet authorities suspended the mobile Internet service after Indian troops launched a crackdown operation in Budgam district, today.
According to media sources, the mobile internet service was snapped to prevent people from holding demonstrations against the operation and sharing information about the developing situation. Indian troops cordoned off Futlipora Pakharpora area of Budgam this morning and started searches, causing huge inconvenience to the people. Earlier, gunshots were heard in the same area. KASHMIR VOICE 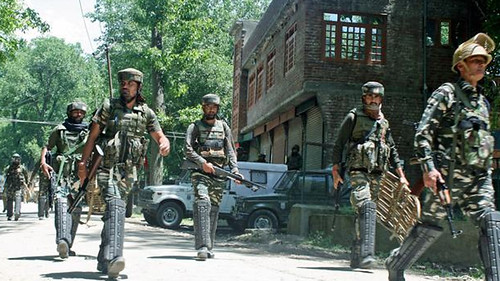