Srinagar, November 29 (Kashmir Voice): In occupied Kashmir, Hurriyat leaders and organizations have strongly denounced the thrashing of Kashmiri political prisoners in New Delhi’s Tihar jail.
According to media sources, APHC leader Muhammad Yousuf Naqash, in a statement in Srinagar expressed concern over the ill-treatment and ruthless thrashing of Kashmiri prisoners including Shahid Yousuf, the son of Hizul Mujahideen Chief Syed Salahuddin, by the authorities of Tihar jail. He said that miserable condition and inhuman treatment meted out to the Kashmiri prisoners in the jails of Jammu region and India was a matter of grave concern. Dukhtaran-e-Millat (DeM) General Secretary, Nahida Nasreen, in a statement in Srinagar expressed serious concern over the grisly act of thrashing of Kashmiri prisoners in Tihar jail. She said that all jails of Jammu region and India had been turned into the Guantanamo Bay prisons for the Kashmiri detainees. She strongly condemned the beating of 18 prisoners including Shahid Yousuf in Tihar jail. She said that Shahid Yousuf was being harassed and victimized for none of his crimes except being son of Syed Salahuddin. Another APHC leader, Bilal Siddiqui, and the spokesman of Jammu and Kashmir Muslim League in their statements in Srinagar termed the attack on Shahid Yousuf and others in Tihar Jail highly condemnable. They said that such kind of brutalities could not intimidate the Kashmiris into submission. Abdul Majeed Trumboo, Shabbir Ahmad Dar, Muhammad Iqbal Mir, Muhammad Ahsaan Untoo, Imtiyaz Ahmad Reshi, Ghlam Nabi War, Yasmeena Raja, Zafar Akbar Butt, Javed Ahmad Mir and Mir Shahid Saleem in their statements in Srinagar expressed grief over harassment of prisoners in Indian jails and demanded shifting of Kashmiri prisoners lodged in various jails across India to the valley, saying it is imperative to prevent such incidents in future. The High Court Bar Association of the occupied territory in its statement in Srinagar condemned the beating of Kashmiri prisoners including Shahid Yousuf in Tihar Jail. It urged the international human rights organizations to visit Tihar Jail and see as how the jail authorities were subjecting the Kashmiri prisoners to ill-treatment. The civil society of Budgam in its statement condemned the heinous and murderous assault on Shahid Yousuf and demanded an immediate action against the culprits. It urged the Indian authorities to shift Shahid Yousuf to Srinagar Central Jail to ensure his safety. KASHMIR VOICE 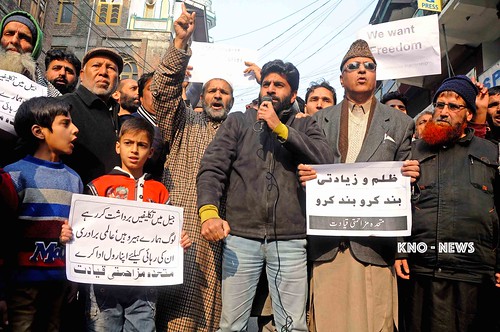 Srinagar, November 29 (Kashmir Voice): In occupied Kashmir, family members of illegally detained Hurriyat leader, Abdul Samad Inqalabi, have said that he was beaten to pulp by Indian police inside Kathua Jail in Jammu.
According to media sources, Indian Army had arrested Samad Inqalabi from the residence of popular martyred youth leader, Burhan Wani, in Tral town on July 6 this year – two days before his first martyrdom anniversary – and later handed him over to the police. After being kept at Tral Police Station for 13 days, he was shifted to Srinagar Central Jail. Later, he was booked under draconian law, Public Safety Act, and was shifted to Kathua Jail. “Samad Inqalabi was ruthlessly beaten up inside the jail and to prove that he is mentally unsound, the jail authorities even kept him in mental hospital,” family members of the detained leader said. “The incident occurred on 14th of this month. We are eagerly waiting for his next hearing that falls on December 7 in Kupwara Session Court. There is a threat to his life and we appeal the authorities to shift him to Srinagar Central Jail,” they added. KASHMIR VOICE 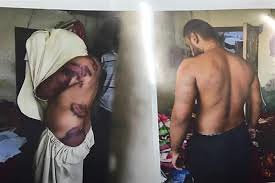 Srinagar, November 29 (Kashmir Voice): In occupied Kashmir, Tehreek-e-Hurriyat Jammu and Kashmir has strongly condemned the use of brute force on people and damaging their properties by Indian troops during a cordon and search operation in Hajin area of Bandipora district, the other day.
According to media sources, Tehreek-e-Hurriyat in a statement issued in Srinagar said that the troops also vandalized the household goods at the residence of Hurriyat leader, Abdul Hameed Parray, while he himself has been languishing in jail for last two years under draconian law, Public Safety Act (PSA). KASHMIR VOICE 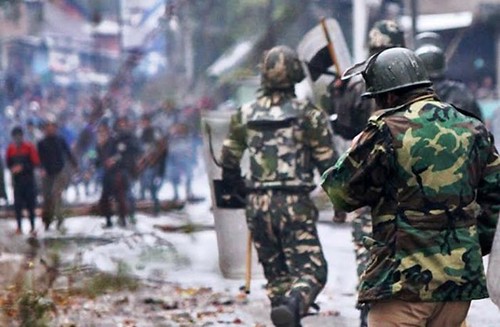 Islamabad, November 29 (Kashmir Voice): The Chairman of Jammu and Kashmir Peoples Freedom League (JKPFL), Muhammad Farooq Rehmani, has expressed grave concern over the plight of Kashmiri political prisoners in Indian jails and interrogation centers.
According to media sources, Muhammad Farooq Rehmani in a statement issued in Islamabad said that Indian authorities rule the roost by unleashing unimaginable inhuman terror on the Kashmiris for their just and peaceful demand for right to self-determination. He strongly condemned oppression on the people of occupied Kashmir in or outside of the prisons under different tyrannical laws to force them to submission. He said, the party General Secretary, Muhammad Ramzan Khan, who is languishing in Kot Bhalwal jail, Jammu, under draconian law, Public Safety Act (PSA), and is suffering from Asthma for long has been deprived of basic facilities and necessary treatment, resulting in further deterioration of his health. Muhammad Farooq Rehmani strongly condemned physical and mental torture of the Kashmiri detainees in jails and thrashing of political prisoners including Shahid Yousuf, son of United Jehad Council Chief Syed Salahuddin, as confirmed by a report of the Delhi High Court. He deplored that the bodies of the beaten prisoners were bleeding when they were seen by the other inmates. Their beating and, leaving them bleed by the Tamil Nadu Special Police in Tihar jail has rightly infuriated the people and, sent shock waves across Jammu and Kashmir, he added. The JKPFL Chairman urged the Amnesty International and the Human Rights Watch to impress upon the UN and the UNCHR to take immediate cognizance of the threatening human rights conditions of Kashmir and in particular of the predicament of the Kashmiri detainees and prisoners in Indian jails and interrogation centers and pay visit to all such jails where Kashmiri prisoners have been detained. He said if any detainee is released by a court he is rearrested by police forthwith. Farooq Rehmani said, Kashmir is a lingering dispute and the resolutions on Kashmir give the UN right to make India accountable on its treatment and human rights questions, failing which an entire generation is under threat in Indian repressive hands. Besides, regional tension may lead to any mishap between the two atomic states in South Asia, he added. KASHMIR VOICE 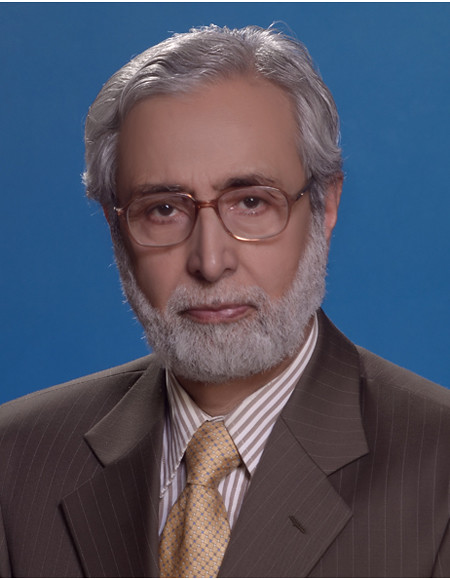 Islamabad, November 29 (Kashmir Voice): The Convener of AJK chapter of Mirwaiz Umar Farooq-led Hurriyat forum, Syed Faiz Naqashbandi has expressed serious concern over the miserable plight of illegally detained Kashmiris lodged in various prisons of Jammu region and in Delhi’s infamous Tihar jail.
According to media sources, Syed Faiz Naqashbandi in a meeting with a group of journalists in Islamabad said, the torture of the over a dozen Kashmiri political prisoners in Tihar Jail is a matter of serious concern. He said that harassing and thrashing of the detainees by the authorities continued unabated and in a recent incident, Shahid Yousuf, son of Syed Salahuddin, and a youth Ahtesham Ahmad of Sopore were beaten to pulp. The attack on prisoners was carried out by the jail administration and at least 18 prisoners were injured by the Tamil Nadu Special Police, deputed in Tihar jail, he said. Syed Faiz Naqashbandi also expressing serious concern over the deteriorating health of senior Hurriyet leader, Shabbir Ahmad Shah, in the jail said the ghastly act had put the lives of all Kashmiri political prisoners in danger. He said that such cheap tactics could not suppress the freedom sentiment of the people of Kashmir and they would continue their liberation movement till complete success. KASHMIR VOICE 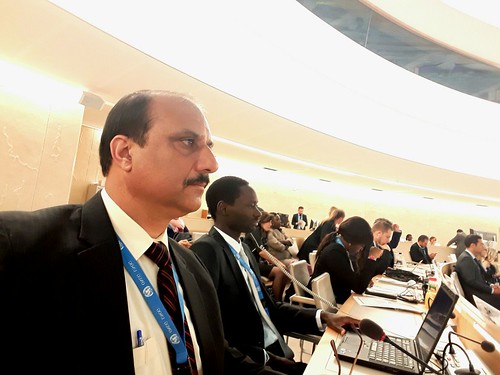 Srinagar, November 29 (Kashmir Voice): In occupied Kashmir, people staged forceful demonstrations in Pulwama district, today, against ruthless thrashing of some locals by Indian troops, last night.
According to media sources, people took to the streets in Aglar Kandi area of the district and staged forceful protests against the brutalities of the troops. The protesters raised high-pitched anti-India and pro-freedom slogans. KASHMIR VOICE 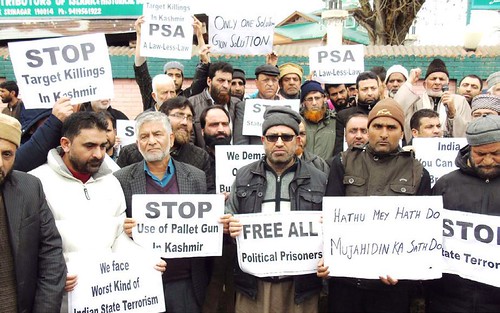