Kargil, September 08 (Kashmir Voice): In occupied Kashmir, thousands of people staged a demonstration in Kargil to protest against the genocide of Rohingya Muslims in Myanmar.
According to media sources, the protest organized by Imam Khomeini Memorial Trust (IKMT), Kargil, started from Jamia Masjid Kargil and after passing through main bazaar culminated at Lal Chowk in the city. The protestors carrying placards raised slogans against Myanmar Government and international human rights organizations. Addressing the protestors, members of the so-called Kashmir Assembly from Kargil, Haji Asghar Ali Karbalai, said that the forceful expulsion of Rohingyas from Myanmar and their ethnic cleansing was a test for Muslims living in South Asia as well. â€œWe condemn the attack on Rohingyas,â€ he said. Asghar Ali Karbalai also denounced the Indian Prime Minister, Narendra Modiâ€™s visit to Myanmar. He said, Indian prime minister tweets after every incident happening in Europe but when genocide is happening in the neighbourhood, he visits the same country with flowers in hands, which shows his real face of RSS Ideology. He said that Modi-led Indian government was trying to change the demography of occupied Kashmir. He said that the people of Kargil must rise above party lines and should be ready to frustrate such moves so that the events like Rohingyas would not replicate in the territory. Maulana Abbas Krrari and Sheikh Bashir Shakir also addressed the gathering and condemned the ongoing genocide in Myanmar. Meanwhile, the Jammu and Kashmir Muslim League in a statement expressed serious concern over the ethnic cleansing of Rohingya Muslims in Myanmar. It appealed to the UN and world human rights organizations to save the Rohingyas from the ongoing onslaught. KASHMIR VOICE 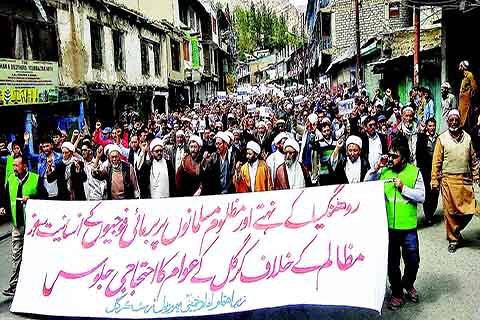