Srinagar, September 12 (Kashmir Voice): In occupied Kashmir, Dukhtaran-e-Millat has said that Jammu and Kashmir will only be heaven on earth when India ends its illegal occupation by withdrawing its brutal forces from the territory.
According to media sources, the DeM General Secretary, Nahida Nasreen in a statement in Srinagar while reacting to the Indian Home Minister Rajnath Singhâ€™s remarks said that Kashmir had been turned into a hell by the Indian forces and the ugly Indian occupation. Rajnath Singh during his visit to Kashmir had said that India would change Kashmir into a paradise. â€œIt is India which has turned Kashmir into a killing field. Tens of thousands of people have been murdered by the Indian forces; hundreds of thousands have been injured. The miseries of Kashmiris will end only when the illegal Indian occupation of the territory ends,â€ she added. Nahida Nasreen said that such visits by the Indian politicians were useless and futile and were only meant to hoodwink the people as well as the international community. â€œThere had been so many such futile exercises in the past; the only solution to Kashmir issue is to give the Kashmiri people their right to self-determination,â€ she stated. â€œNo A, B or C formulae will work in Kashmir. Only permanent solution to Kashmir dispute is that India leaves Kashmir by ending its illegal and brutal occupation,â€ she maintained. Meanwhile, Nahida Nasreen paid glowing tributes to the youth who were recently martyred by Indian troops in Shopian and Kulgam districts. KASHMIR VOICE 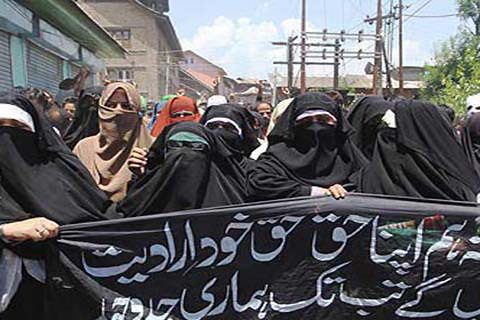