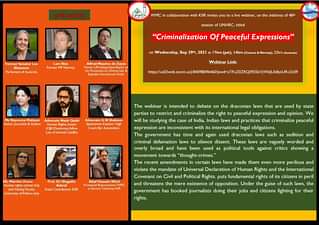 Islamabad, September 30 (Kashmir Voice): The speakers at a webinar have said that the Modi-led fascist Indian regime is suppressing the voices of dissent under the guise of draconian laws that curb and criminalize peaceful expression in Indian illegally occupied Jammu and Kashmir.
According to media sources, the webinar “Criminalization of Peaceful Expressions” was hosted by World Muslim Congress (WMC) in collaboration with Kashmir Institute of International Relations (KIIR) in Islamabad as a sideline event of the ongoing 48th session of UN Human Rights Council (UNHRC) in Geneva.
Noted human rights activists, international law experts, social activists, academicians and journalists including former Senator Lee Rhiannon from Australia; Lars Rise, former MP Norway; Alfred Maurice de Zayas, former UN Independent expert; Advocate Nasir Qadri, Ms. Marianna Zucca from Italy, Professor Dr Shagufta Ashraf and others addressed the webinar. The event was moderated by KIIR Chairman and WMC permanent representative, Altaf Hussain Wani.
Discussing the devastating impacts of the draconian laws, the speakers said, India has time and again used black laws to stifle the dissent in the territory and suppress people’s legitimate resistance for realization of right to self-determination. Describing these laws as the biggest threat to freedom of expression in Kashmir, they said that criminal defamation, violence against journalists, limits on the right to information, commercial pressures and mechanisms to seek control over the media were the imperialist tactics India has been using to silence the independent media and journalists.
Referring to Unlawful Activities (Prevention) Act (UAPA) and other laws, the speakers said, “In recent years, India’s criminal defamation laws have been used against journalists, activists and other citizens, raising their voice against the policies of oppression and suppression of the Indian government.”
Voicing their concern over the prevailing situation in the territory, the panelists on the occasion said, the occupied territory has witnessed an alarming increase in attacks on peaceful speech and expression, especially after 5th August 2019 when Indian in brazen violation of the international covenants stripped Kashmir of its special status.
Citing Article 19 of the International Covenant on Civil and Political Rights (ICCPR), they said that the law clearly states that “everyone shall have the right to freedom of expression.” The Indian laws and practices that criminalize peaceful expression, they said, were inconsistent with its international legal obligations.
“Any person who dares to speak against the Indian brutalities and injustices meted out to the people of Kashmir is harassed and humiliated and booked under draconian laws, be it a journalist, rights activist, politician or a common citizen”, they said.
The recent raids by police on the homes of four Kashmiri journalists, Hilal Mir, Shah Abbas, Showkat Motta and Azhar Qadri and confiscation of their phones, laptops and passports speak volumes about threats the Kashmiri journalists have been facing at the hands of India’s apartheid regime.
“The notorious investigating agency, National Investigation Agency (NIA) on the other hand has been given a license to carry out raids on the residences and offices of journalists, media houses and NGOs”, they said, adding that massive crackdowns were launched against leading newspaper editors, publishers, media organisations including the offices of Daily Kashmir Times and Greater Kashmir.
Terming it as an atrocious assault on the press freedom, the speakers said, many Kashmiri journalists who have been charged under sedition laws continue to languish in Indian jails.
They said that the UN officials have time and again raised their alarm over the threats faced by the journalists in Kashmir. Referring to the UNESCO report, they said, Kashmir continues to be an extremely dangerous place for journalists as dozens of journalists have lost their lives in Kashmir Valley since 1990.
The panelists said that the Facebook and Twitter users were being harassed and terrorized by the authorities under the cyber crime law enforced in the territory.
Terming the Indian government’s censorship efforts as yet another attempt to silence the Kashmiri voices, they said that the BJP’s cyber brigade had deactivated accounts of thousands of Kashmir internet users in the guise of containing the circulation of fake news on social media platforms.
They said that the global community should take serious notice of the Indian government’s authoritarian diktats aimed at criminalizing journalism and peaceful expression. KASHMIR VOICE

← JKEM Expresses Concern over Surge in Indian State Terrorism in IIOJK
Indian Troops have Crossed all Limits of Cruelty in IIOJK: Khawaja Firdous →