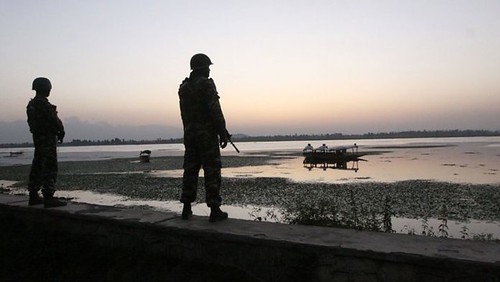 Muzaffarabad, September 30 (Kashmir Voice): The Chairman of Pasban-e-Hurriyat, Uzair Ahmad Ghazali, has said that delay in the resolution of the Kashmir dispute will be disastrous for peace in the south Asia region.
According to media sources, Uzair Ahmad Ghazali in a statement issued in Muzaffarabad said India will not be able to intimidate the people of IIOJK by conducting air military exercises on Dal Lake.
“India is relentlessly using military force to oppress the people in occupied Jammu and Kashmir. Aerial exercise on Dal Lake which is the urban area of the occupied territory is the testimony of state oppression on unarmed civilians,” he said.
Uzair Ghazali expressed concern over the serious threats to peace in the region in view of India’s aggressive military action and the deteriorating human rights situation in the occupied territory. He said Jammu and Kashmir is a disputed territory according to UN resolutions where India has usurped all basic human rights of the people. He maintained that the Kashmiri people want freedom Indian and they have rendered unprecedented sacrificed for this sacred cause. Pasban-e-Hurriyat Chairman appealed to the international community to stop India from using military force and fulfill its promise of resolving the Kashmir dispute on the basis of giving the Kashmiris people their right to self-determination according to UN resolutions. KASHMIR VOICE