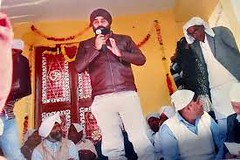 Jammu, September 30 (Kashmir Voice): In Indian illegally occupied Jammu and Kashmir, APHC leader and Chairman of Jammu and Kashmir Social Peace Forum (JKSPF), Advocate Devinder Singh Behl, has called upon India and Pakistan to resolve the Kashmir dispute in accordance with the aspirations of the Kashmiri people for ensuring lasting peace and security in South Asia.
According to media sources, Advocate Devinder Singh Behl in a statement issued in Jammu said the Kashmiri people and the government of Pakistan are in favour of a peaceful solution to the dispute but India’s stubbornness is the biggest obstacle in the way of achieving this objective. He said Pakistan has been advocating peaceful resolution of the Kashmir issue right from the beginning.
Advocate Behl said Indian rulers have turned IIOJK into the largest jail of the world to prolong India’s illegal occupation of Jammu and Kashmir. He said India has used every brutal tactic to suppress the Kashmiris’ freedom struggle but failed in its nefarious designs and the day is not far when Kashmiris will gain freedom from Indian bondage.
The Hurriyat leader said India should remember the fact that the tyrannical and occupational countries have to give up their illegal occupation one day. He said that the Kashmiri people are determined to continue their struggle for freedom from Indian subjugation. He maintained that sustainable peace and security cannot be established in South Asia without resolving the Kashmir dispute. Therefore, he added, it is the responsibility of the international community and the United Nations to play their role in finding a lasting solution to the dispute.
Meanwhile, a delegation led by Tehreek-e-Istiqlal Jammu and Kashmir Chairman Ghulam Nabi Waseem and General Secretary Abdul Hameed visited Hurriyat leader Altaf Ahmad Khan at his residence in Srinagar to express condolences on the death of his father. Expressing heartfelt sympathy and condolences to the bereaved family, the delegation prayed for the elevation of the ranks of the deceased. KASHMIR VOICE