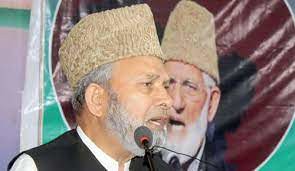 Rawalpindi, September 30 (Kashmir Voice): A special function was organized under the auspices of Azad Jammu and Kashmir chapter of Tehreek-e-Hurriyat Jammu and Kashmir in Rawalpindi on the occasion of the 93rd birthday of Baba-e-Hurriyat, Syed Ali Gilani. It was attended by Hurriyat leaders and people from different walks of life.
According to media sources, besides Tehreek-e-Hurriyat Convener, Ghulam Muhammad Safi, the other speakers on the occasion paid rich tributes to Syed Ali Gilani and highlighted his sacrifices and services for the Kashmir freedom movement.
They said that Syed Ali Gilani’s valiant commitment to Islam and the Kashmir cause was crystal clear and he faced all the hardships and sufferings that came in his way with great bravery and courage.
The speakers said that along with Islam and freedom of Jammu and Kashmir from Indian illegal occupation, Syed Ali Gilani had a great love for Pakistan which he expressed on various occasions, especially when he was on his death bed. They added that the tyrannical Indian authorities snatched the body of the veteran Hurriyat leader and buried it in the darkness of night in Hyderpora area of Srinagar against Syed Ali Gilani’s wish and preventing his family members attending his last rites and burial.
They thanked Prime Minister, Imran Khan and Foreign Minister, Shah Mehmood Qureshi for effectively highlighting the Kashmir dispute before the world and aggressively exposing Indian atrocities, human rights violations and state terrorism in IIOJK. KASHMIR VOICE

← Indian Troops have Crossed all Limits of Cruelty in IIOJK: Khawaja Firdous
World Hailed for Endorsing Pakistan Dossier on HR Abuses in IIOJK →