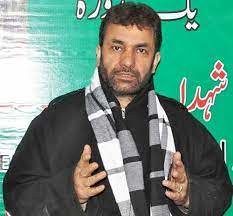 Srinagar, October 03 (Kashmir Voice): In Indian illegally occupied Jammu and Kashmir, Hurriyat leader, Javaid Ahmed Mir has said that the Kashmir dispute poses a threat to world peace so it is the responsibility of the international community and human rights organizations to play role for its peaceful solution.
According to media sources, Javaid Ahmed Mir in his speeches during various condolence meetings in Srinagar said that Kashmiris were suffering from severe problems due to unresolved Kashmir dispute and were living a miserable life.
He said that the Kashmir dispute was the main cause of tension between Pakistan and India and relations between the two countries could not improve unless the dispute was resolved in accordance with the United Nations resolutions and aspirations of the Kashmiri people.
Javaid Ahmed Mir demanded the release of Hurriyat leaders and activists languishing in different jails of India and the territory. Paying tributes to all the martyrs of Kashmir, he said that the great sacrifices of the Kashmiri martyrs would not go waste and one day it would bring fruit and the people of Kashmir would get rid of Indian subjugation. KASHMIR VOICE