Srinagar, December 25 (Kashmir Voice): In occupied Kashmir, in a significant revelation, Indian authorities have tried to pursue the wife of jailed Hurriyat leader and Chairman of JKLF-R, Farooq Ahmad Dar, to prevail upon her husband to leave the path to freedom for his release, but she rejected the offer altogether.
According to media sources, the authorities approached Assabah Khan, the wife of Farooq Ahmad Dar, who is lodged in Tihar jail in a case, registered against him by Indiaâ€™s National Investigation Agency in 2016, through Senior Superintendent of Police (SSP) Baramulla, Imtiyaz Hussain. Assabah Khan works as an assistant director in the social welfare department. She told media that the officer told her that the NIA was seeking to cut a deal with Farooq and he would be let off if he gave up the path to freedom. Earlier, he remained in detention in different cases for 16 years. He was released in October 2006. Assabah showed the Whatsapp messages in which Hussain asked her to convince her husband to give up the path. The messages were sent to her by him in August and Assabah said that New Delhi was pressuring Dar to join the BJP. The JKLF-R leader’s wife said that the police officer told her that he was sent by the NIA, and that in case Dar agreed to join the BJP, he will be set free. As per the Whatsapp messages, Assabah Khan told Hussain that she was ready to receive the dead body of her husband, but would not strike any deal with NIA.â€ She even said that she was ready for her own death but would not cheat her people. KASHMIR VOICE 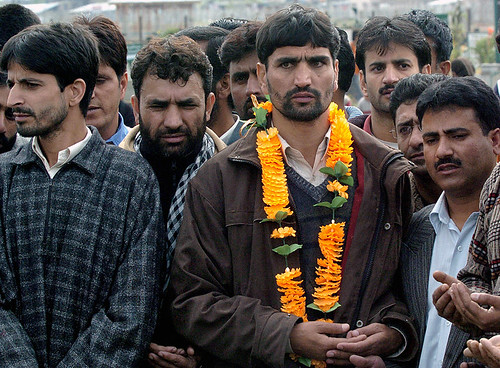 Srinagar, December 25 (Kashmir Voice): In occupied Kashmir, after winning accolades for his coverage of heart-wrenching Rohingya crisis in Bangladesh, Kashmiri photo-journalistâ€™s work has been featured by worldâ€™s top magazine, Time in its annual ratings.
According to media sources, Dar Yasin, a Srinagar based staffer for the Associated Press (AP), is a battle-hardened photo-journalist, who has worked in worldâ€™s intense conflicts including Afghanistan and Iraq. In its announcement about the top ratings to photographs around the world, the Time.com wrote: It was a relentless year for news. For many, the beginning of Donald Trumpâ€™s polarizing presidency in January set a tone of heightened tension, but it went beyond that. The wildfires and mass shootings, hurricanes and warsâ€”tragedies and milestones that could happen in any yearâ€”felt amplified. Dar Yasin was interviewed by the magazine for his work on Rohingyas for which he spent days together in Bangladesh which hosts most of the fleeing Rohingyas from Myanmar currently. About his photo which was selected as one of the top ten photos, Dar Yasin in his own words tells Time.com: â€œIt was my birthday, Aug. 1, and my kids were making plans for the evening as we were having breakfast. Soon after, I got a call from a fellow photojournalist about a gun battle raging in south Kashmir and I rushed out. By the time we got there, protests had already spread around to nearby villages,â€ he said and added that youth had been killed and a couple of residential houses were destroyed with explosives during the operation. He said that he reached the house of Firdous Ahmad Khan, a 30-year-old, who according to the police was killed in the crossfire, but the villagers informed him that he was killed during protests, and not during the gun battle. â€œHis family was quite obviously in shock and devastated with their loss, and I saw the deceasedâ€™s pregnant wife and his sisters wailing while other relatives and villagers comforted them. I quickly shot a few frames and left as I didnâ€™t want to intrude on a very private moment of inconsolable grief and loss of a loved one. Their cries were all I could hear on the ride home,â€ he said. â€œAs I entered my house, tired and still shaken, my wife and kids came rushing out to hug me. Before I knew it, I was in the midst of my own birthday party celebrations. I smiled and went through the evening with a smile on my face and anguish in my heart. At the time, I remember how hard I struggled to reconcile the horrific scenes of fighting and killing and grieving with the fact that, there I was a little while later, in the cocoon of my own familyâ€”at least outwardlyâ€”celebrating my own birthday. It was a birthday I wonâ€™t forget,â€ he concluded. KASHMIR VOICE 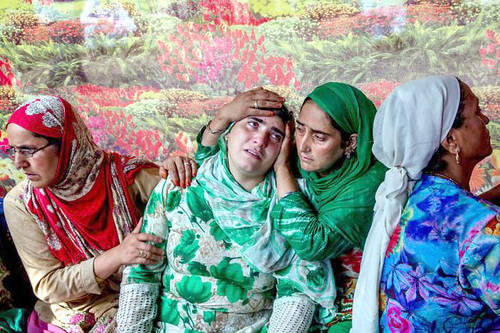 Srinagar, December 25 (Kashmir Voice): In occupied Kashmir, the Kashmir Bar Association and the Chairman of Jammu and Kashmir Peoples, Freedom Muhammad Farooq Rehmani, have expressed satisfaction over the joint declaration issued at the end of First Six-Nation Speakers Conference, in Islamabad.
According to media sources, the declaration stressed the need for settlement of the Kashmir dispute in accordance with the UN Security Council Resolutions. The High Court Bar Association of occupied Kashmir also appreciated the stand taken by the speakers/representatives from Russia, China, Iran, Turkey, Afghanistan and Pakistan on the issue of Palestine and Jerusalem. Muhammad Farooq Rehmani in a statement issued in Islamabad, today warmly hailed the Islamabad Declaration by the speakers of the six parliaments as a very significant and timely document. He said that the parliament speakersâ€™ proclamation and assertions on Kashmir, Palestine, right of self-determination; Trump-decision on Jerusalem, peace and terrorism, etc, would show a new and positive direction to the regional and global horizon different from the American perspective and would further give voice to voiceless nations of the world. Hurriyat leader Mukhtar Waza in a statement called for respecting human rights. He said, â€œIn this Region of SAARC there is a lot off Illiteracy, poverty and there are so many other problems.â€ APHC leader Bilal Siddiqui in a statement termed the prolonging of Shahid Yousufâ€™s detention and summoning of Naseem Gilani to Delhi by National Investigation Agency as a conspiracy aimed at forcing Hurriyat leaders into submission through harassment and intimidation. The Chairperson of Kashmir Tehreek-e- Khawateen, Zamrooda Habib in her statement strongly condemned the assertions made by Chairperson of Womanâ€™s Commission of the territory, Nayeema Ahmad Mehjoor in which she had Kashmiris â€œNot to act in causal manner when encounters are raging.â€ Zamrooda said that Nayeema had issued the statement in her comfortable room without knowing the facts. She said the troops are hitting women intentionally and cited the example of Maisera, who was directly not â€œacting causallyâ€ and there was no encounter. KASHMIR VOICE

Srinagar, December 23 (Kashmir Voice): In occupied Kashmir, the Chairman of All Parties Hurriyat Conference, Syed Ali Gilani, has strongly condemned the re-arrest of Dukhtaran-e-Millat Chairperson, Aasiya Andrabi, by the Indian police.
According to media sources, Syed Ali Gilani in a statement issued in Srinagar said, Aasiya Andrabi is unwell and suffering from many ailments but the puppet rulers claiming to represent a democratic regime have most undemocratically kept her incarcerated only for raising her voice for rights of the oppressed Kashmiris. He also prayed for her speedy recovery. Indian police had re-arrested Aasiya Andrabi and her associate, Fehmeeda Sofi, soon after their release by a Srinagar court on Thursday. Meanwhile, Hurriyat leader and the convener of the AJK-chapter of Mirwaiz Umar Farooq led Hurriyat forum, Syed Faiz Naqshbandi, in a statement in Islamabad, strongly condemned the re-arrest and illegal detention of Aasiya Andrabi, Fahmeeda Sofi and Mushtaq-ul-Islam. He also condemned house arrest and detention of Syed Ali Gilani, Mirwaiz Umar Farooq and Muhammad Yasin Malik and urged the international human rights organisations to take notice of the grim human rights situation in occupied Kashmir. KASHMIR VOICE

New Delhi, December 23 (Kashmir Voice): A Delhi court has extended the judicial custody of Shahid Yousuf, the son of prominent Kashmiri freedom leader Syed Salahuddin, in a fake case registered against him six years ago.
According to media sources, the 42-year-old Shahid Yousuf, a government employee in occupied Kashmir, was arrested by Indiaâ€™s National Investigation Agency (NIA) after summoning him for questioning at its headquarters in New Delhi on October 24, 2017. He was remanded in seven-day NIA custody only last Wednesday. Shahid Yousuf was presented before district judge Poonam Bamba who, during the in-camera proceedings, extended his judicial custody till January 19, 2018. KASHMIR VOICE